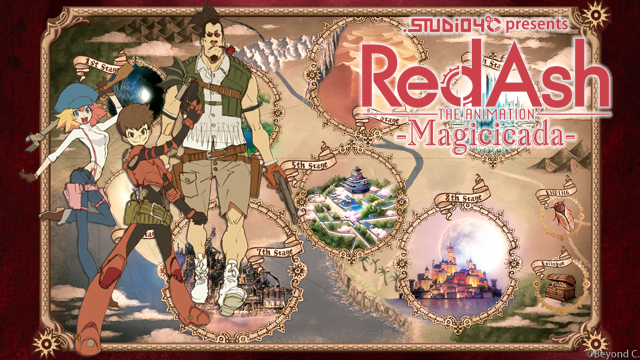 To extend runtime of the animation, we have opened further fundraising through “STUDIO4℃FUN&”!

In case both platforms fail to reach the goal, raised fund will still be used to create animation, in proportion to the amount of fund, such as extending runtime, making spin-off story of the main characters, or creating opening animation.


You will receive your returns regardless of the result of the campaigns.
For any questions, feel free to contact us: fun-and@studio4c.jp

August 14
To extend runtime of the animation, we have opened further fundraising through “STUDIO4℃FUN&”!


The main characters will explore separate unique worlds and stories in the animation and game created by two production teams with full creative freedom.

comcept, a creative team led by Keiji Inafune, a man involved in the creation of countless hit games as a creator at Capcom.

The two entities will unleash their creative powers, with Red Ash as the common theme.

“Red Ash THE ANIMATION” is envisioned as a fast-paced, entertaining film in which unique characters explore various stages.

We call it a “treasure-hunting animation.” Progressive stages of the adventure will be created by STUDIO4℃ creators, artists whom we wish to collaborate with, and young up-and-coming talents. The idea is to incorporate different worldviews by bringing together creators of diverse talents to develop each new stage of the adventure. The ultimate vision is to produce a movie involving dozens of talented creators!

We need your support to create a movie filled with gimmicks, riddles, secrets and conspiracies that will keep you on the edge of your seat!

It is an innovative entertainment concept brought to you by STUDIO4℃, the creative studio of the groundbreaking “Genius Party” anthology!

They say that pushing the wrong button will cause “them” to awaken and emerge from underground.

Is the map grandpa gave to Beck a treasure map? Or a landmine map? Intrigued by the mysterious code, Beck and his best friend Deny continue to dig caves in search of hidden treasure. But the friends end up parting ways and competing for the treasure.
Pictures drawn by Automata
A mysterious Japanese clock
The meaning of a cue from a spring-driven computer ...?

Different mysteries and items appear at each new stage of the saga. The imaginations of the creators behind the stories run wild!

The top creators of STUDIO 4℃ are developing an unprecedented 3D animation experience!

First of all, we try to reach the initial goal to the first 12 min episode.

Every time we reach a new stretch goal, additional stage (minute) will be added to the story.

Animation production requires meticulous preparation and development. By building the story step by step, the level of excitement and quality of each stage will be well improved.

The story unfolds as the main characters travel through various stages.

How many artists will participate in the work? How will the story turn out? It’s all up to YOU, the backers of this project!
If our ultimate goal of $2,480,000 is achieved, the project will culminate in the production of a feature film. We hope everyone to watch the animation on a big screen! Also the film will be applied to international film festivals for competition.
Support us to make this challenging but ultimately entertaining animation project happen！

Achievement of “stretch goals” will determine how many stages will be created and eventually WHO will participate in the project. Final confirmation will depend on creators’ schedules, but we are open to your requests! Tell us whom you want to be involved in the project!

Talented, young CGI creator Yuta Sano will take the helm as director of RED ASH THE ANIMATION. In his directorial debut, Sano will challenge himself in this new form of expression.

I plan to create all characters in 3D models in Red Ash THE ANIMATION. Instead of using cel shader, I’m developing the models in the style of illustration in order to mix the excellent essence of 2D painting with 3D's solid image. As for motion, I want to combine fluent 3D animation moves and Japanese hand-drawn animation techniques.

Expressions such as changing a character’s perspective in a motion or dynamic character deformations are some of typical techniques in Japanese animation, which are considered to be difficult to adopt in 3D. We would like to take on the challenge of developing those difficult expressions in 3D on this project.

STUDIO4℃ is putting everything to create this new form of Japanese animation. Please support Red Ash THE ANIMATION –Magicicada– !

★To backers who made pledges on the Kickstarter.★
You can upgrade your pledge with【$1+ UPGRADE tier.】
Feel free to ask any questions via email: fun-and@studio4c.jp.

STUDIO4℃ is a creative studio consistently producing high-quality film and video work. Its distinctive outputs traverse genre and are highly acclaimed worldwide.
Major works are theatrical movies such as “MEMORIES” (1995), “Spriggan” (1998), “MIND GAME” (2004), “Tekkonkinkreet” (2006), “Genius Party” (2007), “BERSERK The Golden Age Arc” trilogy (2012), and more. There are also many co-production titles with international companies such as “The ANIMATRIX”, “BATMAN: Gotham Knight”, game “HALO”, TV series “THUNDERCATS”. STUDIO4℃ has been creating cutting edge visual works for various media from theatrical movies, short films, music clips to commercials, and has received many awards in and outside of Japan. The latest film “harmony/ ” (2015) will be released in theaters in fall 2015 (Japan). The studio is led by Eiko Tanaka, who participated in theatrical movies “My Neighbor Totoro” (1988) and “Kiki's Delivery Service” (1989 ) directed by Hayao Miyazaki, as a line producer at Studio Ghibli. Taken from the fact that water is at its densest at 4℃, the company name represents STUDIO4℃’s creative manifesto: “Always create works that are dense with substance and quality.”


The materials presented here are still under development. The designs and duration of stages are subject to change. Depending on the amount of funds raised, overall duration may also change, and completion of the project may be delayed.
Production of theatrical film will be contingent upon achievement of the final stretch goal.

Q：Is Red Ash -Magicicada- a movie, tv series, or a game?
A：Red Ash -Magicicada- is an animation movie.
It starts as a short movie, and every time we meet a stretch goal, a new stage (more duration) will be added to the story. We hope to make it as a theatrical movie (about 90 min), and it will happen when we reach the final goal!


Q：What is the language of dialogue? Which subtitles will there be?
A：The animation will be in Japanese dialogue with English subs.
We are also discussing about subs and dubs in other languages.


Q：Why are there differences between the Animation and the Game such as the skin color of Call and etc.?
A：Animation and Game are parallel worlds and each worldviews are very different.
There are differences in character designs, color designs, voice actors and more. We hope you enjoy the two worlds!


Q：What rating do you plan for Red Ash THE ANIMATION?
A：Our plan is General. We want everyone to watch our film!

Choose a Return and support the project

The campaign will end on 14th October 2015 at 9:00 PM JST. All pledges from supporters will be charged and go to the project fund instantly.

This tier is for backers from Kickstarter.
You can upgrade your pledge by adding difference amount here!